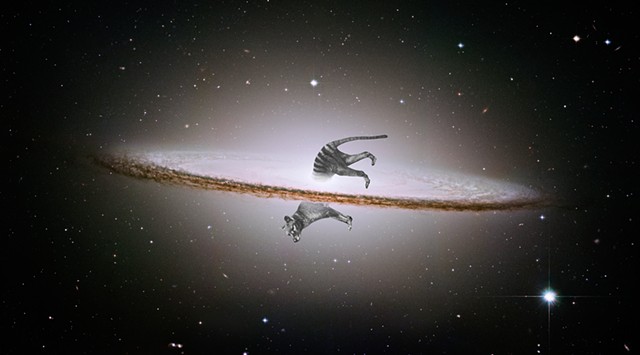 'Endless Thylacine'
From the 'Cosmos' series
next >

The Thylacine (Thylacinus cynocephalus), also known as the Tasmanian Tiger or the Tasmanian Wolf, was the largest known carnivorous marsupial of modern times. The Thylacine once lived on mainland Australia & New Guinea, but was likely driven slowly to extinction by pressure from colonizing humans and possibly dingos starting around 2,000 years ago. The last Thylacines on the Australian mainland became extinct sometime in the 1900's, after colonization by Westerners.

There was, however, a stable population of Thylacines on the Australian island of Tasmania until the island was settled by Westerners, who saw Thylacines as a threat to ranching. Competition from introduced wild dogs & disease weakened the population, but the loss of the Thylacine was likely the bounty set upon them by the Van Diemen's Land Company. The company paid 2,184 bounties, though it is thought that many more thylacines were killed than bounties claimed.

The last known wild Thylacine in Tasmania was killed by Wilf Batty, a farmer from Mawbanna, in 1930.