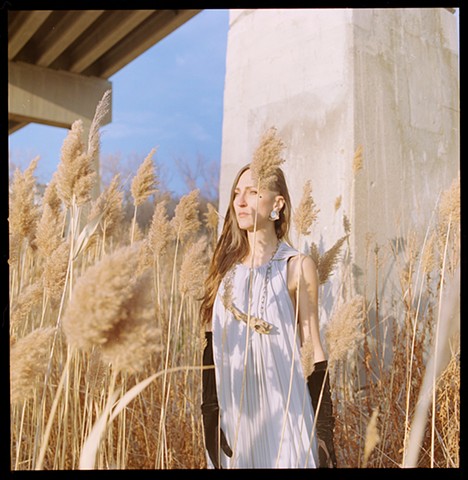 Jenny Kendler (b. 1980, New York City) is an interdisciplinary artist, environmental activist, naturalist & wild forager who lives in Chicago and various forests. She hold multiple identities as a Jewish queer woman, feminist and a single-parent.

Since 2014 she has been the first Artist-in-Residence with Natural Resources Defense Council (NRDC). Kendler sits on the Board of artist residency ACRE and the Board Fundraising Committee of international climate change organization 350.org. She is an art coordinator for direct action to defend the natural world in Chicago and a member of art collective Deep Time Chicago. She is also a founding member of Artists Commit, an artist-led initiative to cultivate climate-consciousness in the artworld.

She has been commissioned to create environmentally-engaged public art projects locations such as Governors Island (NYC, opening 2023), Chicago's Millennium Park for the Art Institute of Chicago, The Lincoln Park Conservatory fern room for Experimental Sound Studio, The Arts Club of Chicago, the 606 elevated trail, Philadelphia's Fairmount Park, the Louisville Riverwalk, a remote desert in Arizona and a tropical forest in Costa Rica.

She has been invited to speak about her environmentally-engaged practice at universities, institutions and symposiums including the Smithsonian NMNH, Wexner Center for the Arts (Columbus, OH), SxSW Eco (Austin, TX), the Goethe-Institut (Chicago), Northwestern University (Chicago), the Botanical Speculations Symposium (SAIC) and delivered the closing lecture at the Shapiro Research Symposium (SAIC).

Alongside an interdisciplinary team, she was awarded a major Humanities Without Walls grant for her community-engagement project Garden for a Changing Climate.

Kendler is a co-founder of the artist website platform OtherPeoplesPixels, and created the The OPPfund, which gives grants to arts, environmental and social justice organizations, and awards the MAKER Grant each year to two socially or environmentally engaged artists in partnership with Chicago Artists' Coalition.

She was also the co-creator (with Molly Schafer) of The Endangered Species Print Project, which from 2009-2018 worked with over 20 artists to create limited-edition artworks which raised funds for critically endangered species. The project was exhibited at spaces like the Notebaert Nature Museum, galleries and film festivals and was covered in Orion Magazine's 35th anniversary issue. ESPP raised over $15,000 for conservation.

Kendler's work has been covered in The New Yorker, The New York Times, Artnet, Art in America, Hyperallergic, The Chicago Tribune, The American Scholar, Juxtapoz, OnEarth Magazine, Chicago Magazine, ArtSlant, in a special Earth Day feature for Mashable—and she has been interviewed on NPR and by Chicago's ABC7 News, among others. Kendler and her work have appeared on the cover of The Public (Buffalo), The Courier-Journal (Louisville), and on the cover of the Chicago Reader three times—in 2014 accompanying a 6-page feature article.

Her artwork and writing has also been featured in a number of published books, including Loanwords to Live With: An Ecotopian Lexicon, Sustainable Solutions from Oxford University Press and Why Look at Plants? by Dr. Giovanni Aloi.

The Center for Biological Diversity's Endangered Species Condom Project, for which she created artwork, was profiled in The New York Times and featured on a billboard in Times Square.

"Jenny Kendler has mastered the art of leveraging elements from the nonhuman natural world—be it amber, kudzu or a whale’s ear bone—into pieces that draw us to examine the nuances of our surroundings. Kendler’s work is as pervasive as nature itself. Her project “1000 Flags/1000 Waters,” in which blue flags are dispatched to communities advocating for clean water, was featured in the MCA’s exhibition “Water After All.” A selection of sculptures on threatened bird species will be shown at Vienna’s Dom Museum, and “Music for Elephants,” a score played on an ivory-keyed piano that counts the number of elephants poached for their tusks, will be featured in the Smithsonian National Museum of Natural History. Her first museum solo exhibition opens at the MSU Broad Museum in January 2021 and includes a piece that highlights how the structure of venomous sea snail’s shell directly contradicts the theory of intelligent design. As an activist, Kendler takes her works to the streets through movements like Extinction Rebellion, where she incorporates communal art activities into environmentalist nonviolent direct actions. In this moment where the call for social justice is high, she is pushing to articulate the connections between the social and the environmental in support of a unifying movement toward justice."

Watch Kendler's virtual program for her project Music for Elephants at the Smithsonian National Museum of Natural History here.

Watch Kendler's artist talk for the Visiting Artist series at the College of DuPage here.

Watch a short documentary by On the Real Film about 'The Playhead of Dawn' here.