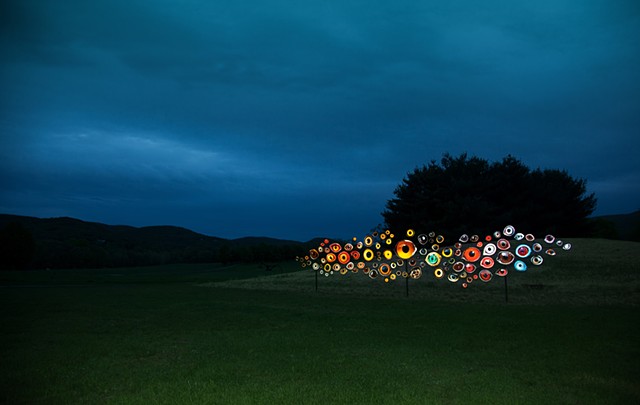 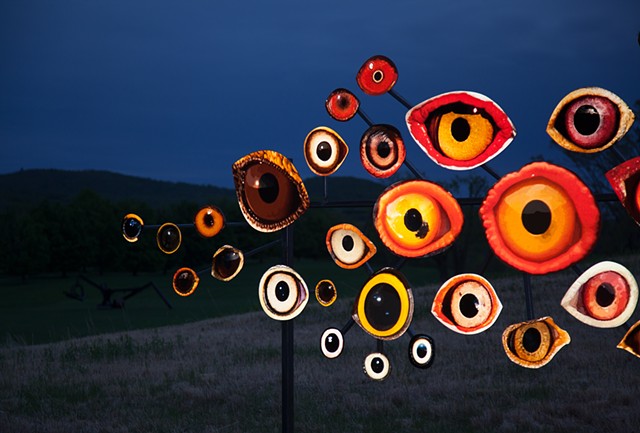 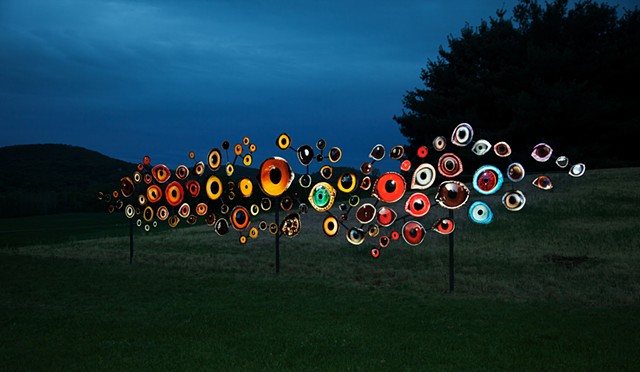 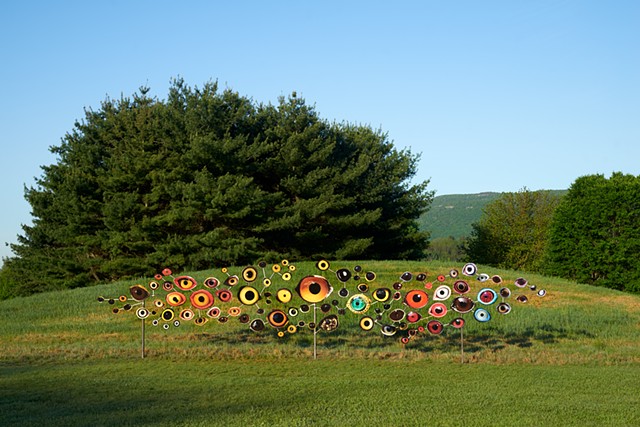 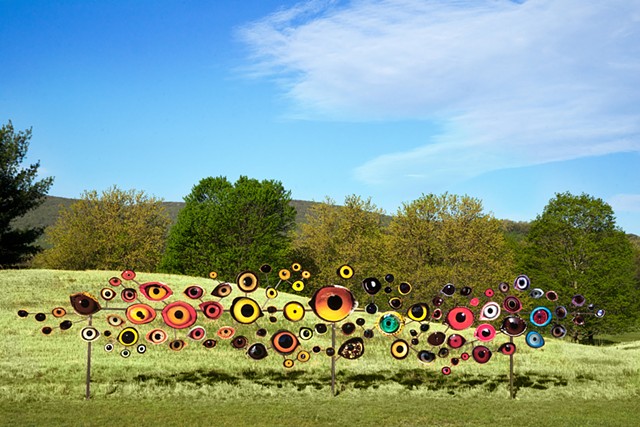 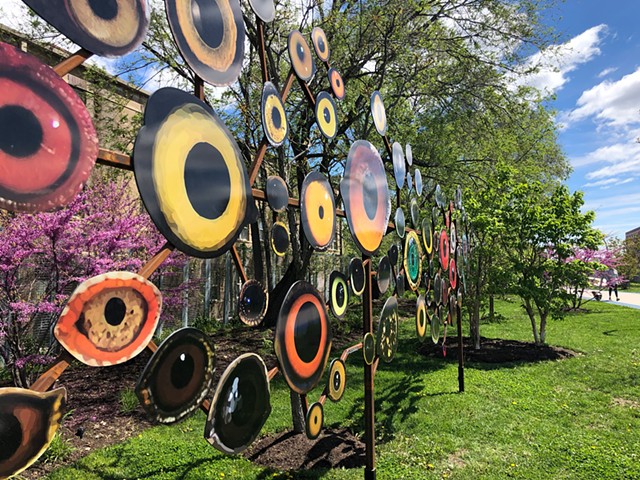 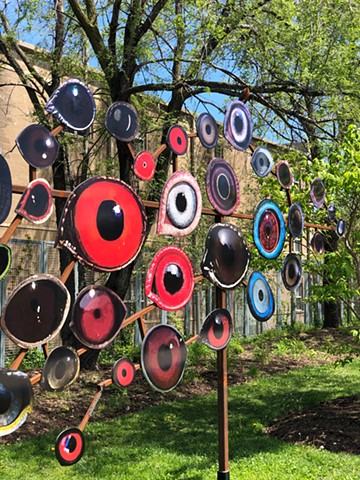 That work was reinstalled as a semi-permanent public sculpture in Chicago on the elevated 606 Bloomingdale Trail between St. Louis Ave. and Kimball Ave. and is fully-accessible via the Spaulding Ave. ramp. It opened Dec 15, 2018 and is planned to be on view until at least Dec 15, 2021.

Birds Watching was also re-created in July 2019 with site-specific E.U. and U.K. climate-threatened bird species for The Eden Project in Cornwall, UK, where it is part of their permanent collection.

In addition, the project was re-imagined as a collage, using birds's eyes from John James Audubon's Birds of America, for the October 2019 'climate change special issue' of Audubon Magazine.

Birds Watching is a 40-foot long sculpture composed of a “flock” of one hundred reflective bird’s eyes mounted on aluminum, created for Storm King’s exhibition Indicators: Artists on Climate Change. The luminous eyes wrap a hill of native grasses in a ten-foot-high band of color, “gazing back” when illuminated. Each eye belongs to a species of bird considered threatened or endangered by climate change in the United States—creating a potent portrait of what we stand to lose.

Within the gaze of these many others, the work asks us to consider our own responsibility for climate change’s myriad effects on other beings. Have we allowed birds and other nonhumans—with their unique and wondrous lifeways—to become the sacrifice zones of extractive capitalism? As Surrealist André Breton suggested, in order to change ways of being, we must first change ways of seeing.

In that spirit, Birds Watching reminds us that truly seeing is a reciprocal act. Mass media imagery and omnipresent screens skew our sense of vision toward a one-way consumption, contributing to our feeling of being at a remove from the world. When we fall into this limited, non-participatory vision, what we see tends to confirm our biases and stereotypes—flattening other beings, like birds, into “things.” This objectifying gaze has become the default, but what about other gazes?—the gaze of mutual curiosity, the gaze of respect—or even of love? Can we re-enchant the way we see, bringing back its full depth of field—and depth of feeling—restoring to these non-human others their full being-ness?

And most potently, when our act of seeing is reciprocated by another being, this mutual gaze involves us in an active participation with and within our vibrant biosphere. Relearning the ability to look deeply at nature engages us in the enfolding, participatory act of living—re-weaving our entanglements with the rest of the natural world.

We cannot solely be spectators in this age of the Anthropocene, when our empathy for other beings—or lack thereof—has itself become an ecological force. Truly seeing can be a first step towards practicing a renewed ethos of mutualism and care.

Birds Watching reminds us that when we look at nature, nature looks back.

From Hyperallergic: "Among such works, Jenny Kendler’s crowd pleasing “Birds Watching” (2018) takes a particularly imaginative approach. Across the length of a 40-foot steel frame, the artist has affixed 100 images of variously sized and colored birds’ eyes — all species imperiled by climate change. At a glance, this cluster of concentric color looks like a whimsical shooting range or a floral bouquet. Upon further inspection, the viewer finds her or himself being viewed by a quizzical and accusatory collective stare. This horde of disembodied eyes, each printed on shiny reflective film, reverses the customary human-bird watcher/watched dynamic to incarnate something like an interspecies conscience."