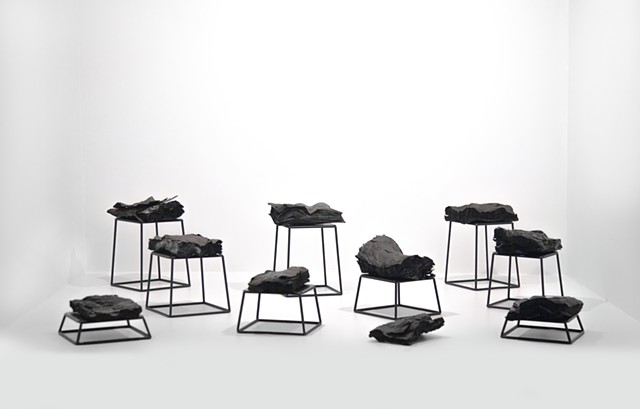 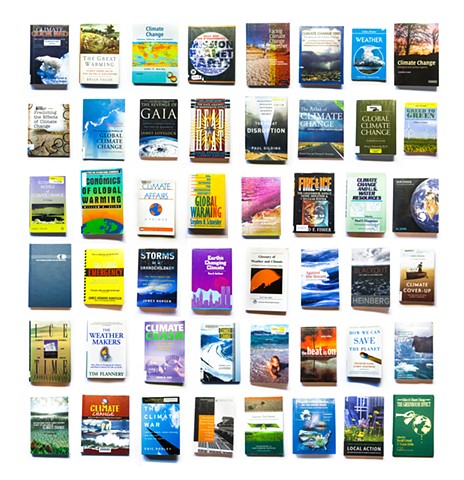 Underground Library is a project based around a collection of five decades of defunct, passed over or ignored books on climate change—from unread technical manuals to forgotten best-sellers. Sourced by the artist over the course of a year from thrift stores, free book boxes, used book stores and eBay, the library represents a printed history of individuals' and groups' calls to urgent action—which remain largely unheeded by a world enraptured by an economic death cult.

As carbon dioxide is added to our atmosphere by anthropogenic processes, our world warms. Left alone, fallen trees, uprooted plants and even our own bodies eventually return their borrowed carbon to the atmosphere—unless it is sequestered in some way, removing it from the carbon cycle.

Creating biochar reduces CO2 in the atmosphere by making this carbon-neutral process of naturally decaying organic matter carbon-negative. Traditionally created from wood using a low-oxygen pyrolization process which leaves behind a form of carbon, highly stable when buried, biochar provides a number of other benefits for plants and microorganisms. For Underground Library Kendler carbonized wood in another form—books. This unusual book-burning and burying creates a literal underground library, restoring use value by sequestering carbon for millennia to come.

The project exists both as a series of documentary photographs and as physical installations of the biocharred books buried in the landscape.

The first edition of the library was installed as a permanent artwork in the restored prairie at the College of DuPage in September 2017, where students assisted in a three-day process of firing the charcoal kiln, burying the books and re-seeding the prairie, while also learning about the endangered prairie ecosystem and impacts of climate change. The artist is grateful to the college’s Visiting Artist program and especially Mara Baker, David Ouellette, Justin Witte and prairie manager Remic Ensweiler as well as artists Amber Ginsburg, Sara Black for their support of this project. Watch a short video about the project in the DuPage prairie here.

From Art in America: "Other artists in the exhibition instead use emotive visual metaphors to embody our potential losses—to create memento mori for industrial civilization. Jenny Kendler’s Underground Library (2017–18) comprises ten books on climate change from the last five decades that the artist has collected and “biocharred,” or burned slowly in low oxygen to sequester carbon. The resulting jet-black shells offer a haunting elegy to books that have outlived their function. When the exhibition closes, they will be buried on the grounds at Storm King, thus preventing their carbon from entering the atmosphere."